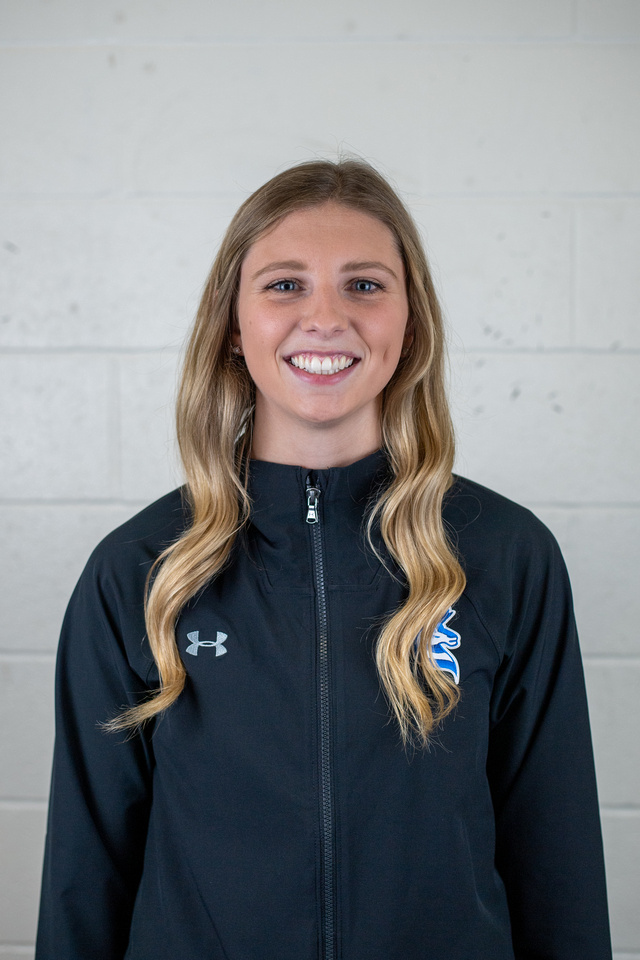 To our new readers who may be followers of our social feeds over the last few years, it will come as no surprise that Mattie Apperson has been one of our favourite subjects to shoot while covering the University of Lethbridge Pronghorns Women’s Hockey team. As the season drew to a close and Mattie graduated to join the Pronghorns’ Alumni community, we had a chance to speak to her for a final phone interview about her time with the club. In light of the recent news from the University of Lethbridge regarding the suspension of their varsity Hockey program (both men’s and women’s), we realize that this piece now takes on a new light. We want to be clear we initially spoke to Mattie before the news broke about the programs, however, we did contact her for a follow-up after the original interview had completed and the first draft of our article was prepared to get her thoughts on the closure of the program.

“It’s something that shaped how we have grown up”

Mattie gained her interest in hockey early in life from her family. In her own words, “My whole family is a hockey family, all 4 siblings play the game”. She fondly recalls her parents coaching her and her siblings through novice and atom levels growing up. “It’s something that shaped how we have grown up”, she says. 4 of the 5 hockey-playing children in her family went on to do hockey in their post-secondary careers. A member of the OWHA until Bantam, Mattie, her mother, and one brother relocated to Saskatchewan’s prestigious Notre Dame high school to pursue her academic athletic future further. It was from Notre Dame that she got the offer to join UofL and become a Pronghorn.

Mattie, like many young hockey players in the ’90s and early 2000s, looked up to Hayley Wickenheiser and Gillian Apps as role models for her hockey career. However, when we asked her who her favourite player was growing up, she admits that she grew to love the game as much as she does because of her sister, a player for the Inferno in the CWHL until they dissolved. That was reinforced by her mom she cites as her role model growing up. “Without her support”, Mattie says of her mom, “I wouldn’t be where I am today.”

When we asked her about her teammates, you could really hear the mix of pride and sadness in Mattie’s voice. She looks back over her five years as a Pronghorn and recognizes many great teammates over that time. There is definite affection for the group of girls that she joined the program with, and those who were a year ahead of her and really helped bring her into the program. Looking back over 2019-20’s season, Mattie says, “This was a hard year because we lost that group of girls. Every year new girls come in and you make friends with them, but that group was really special.” Mattie brightens noticeably when we ask her about what that group of girls is up to now, and she proudly confirms that many of them are still active in hockey in one way or another, either coaching or playing beer league and keeping in touch with each other along the way. She also gave a special shout-out to Heidi Shaw, the team’s trainer. Mattie says that Heidi worked with her through her entire 5 years as a Pronghorn and recognizes her as someone who has always been there to support her and the team. 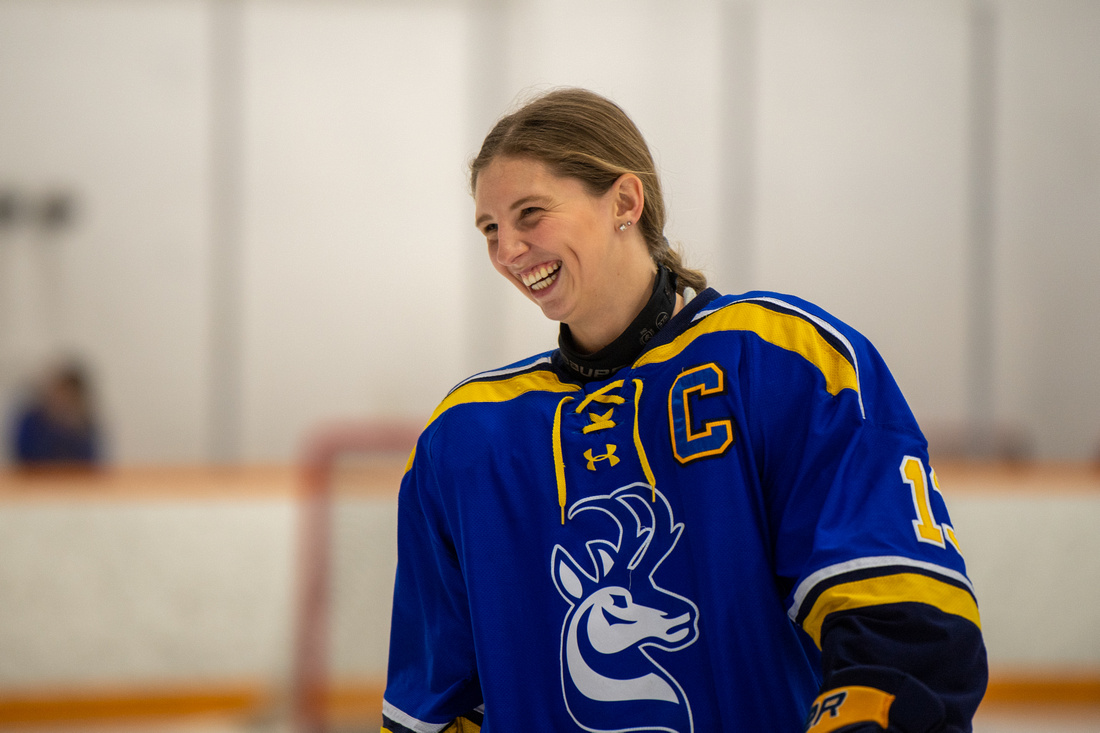 Mattie’s career has had several notable successes. Prior to becoming a Pronghorn, Mattie won the Westerns (regional championship) at the high school level with Notre Dame. In her year after high school but before the Horns, she was on the silver medal JWHL team that year, who earned that honour after coming from behind several times in the tournament and nearly upsetting the tournament favourites in the final game. As a Pronghorn, she fondly remembers a 6 game winning streak in her first year, a year which saw the Horns Women’s team nationally ranked in Canada.

Before stepping onto the ice for any game, Mattie tries to stay loose and likes to fool around with her teammates. She admits to having a small superstition around always putting her right skate and shin pad on first, then the left, in that order every time. She is also always the last one out of the change room. It’s a routine she developed in her 2nd year as a Pronghorn and continued through to her final year as Captain this past year.

“I’m really excited for the program, and I can see the change ahead.”

Mattie is optimistic for the future of the Pronghorns, and says that one of her final highlights was getting to play for the Horns’ new coach this year, Doug Paisley. “I’m really excited for the program, and I can see the change ahead,” she says to us as we start to wrap up our interview.

When we ask if the departing Captain has any final words of advice or wisdom for other young women playing or wanting to play the game, she says that you need to be ready to face a lot of adversity. “Don’t give up or get down on yourself”. It isn’t easy balancing hockey, school, and life. Use your support systems. That’s the biggest thing, she confirms, "learn as much as you can from the others around you." 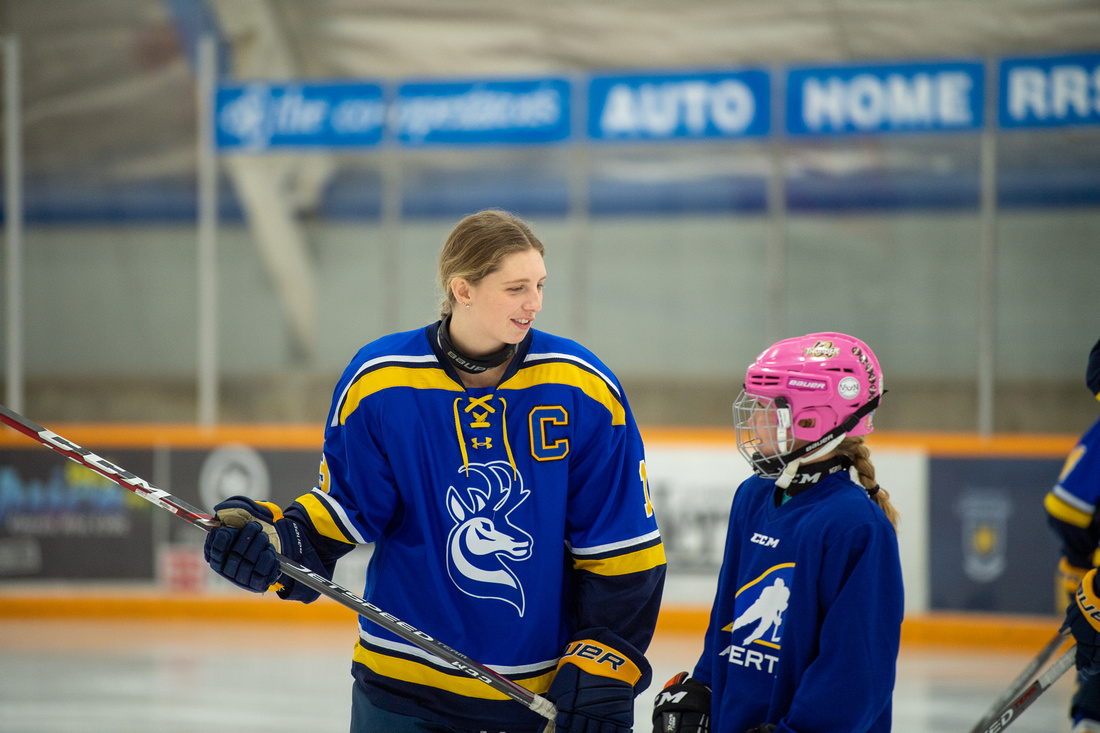 Mattie is gearing up for a move to Calgary this summer. She is looking forward to new opportunities in the business world, possibly going back to school a few years down the road. Mattie hopes for the opportunity to travel but is waiting to see how that fits with her new life before locking in any plans. If you happen to be out in Sweden, where Mattie’s sister now plays for a Swedish team along with several other Canadian WNHL alumni, keep your eyes open – you might just find her on a business trip checking out her sister’s team.

Lastly, as we mentioned at the beginning, this was all put together before the programs were announced to be closing. Mattie provided us the following written statement in follow-up to the interview following her news:

“Heartbreaking news to receive. The program I have been so proud to play for the last 5 years was cut without any warning. This program has made amazing strides and I could see the potential the program had in the coming years. My heart hurts for the players that were supposed to continue on next season. There have been amazing players and people to come from both programs. Extremely disappointed in this decision.”

From the team at MPP, we want to say thank you to Mattie for taking the time to speak with us and share a bit about her time as a Pronghorn as she embarks on her first steps as an alumnus. Mattie was a great player and great advocate for her team and sport in the community, and we’ll miss her. We also want to share her sentiment to the rest of the Horns hockey community, both current and alumni players, and express our deepest condolences over the loss of the program.

https://www.hotmail.com(non-registered)
Thanks for sharing us.
http://199.30.55.59/(non-registered)
Wow! Such an amazing and helpful post this is. I really really love it. It's so good and so awesome. I am just amazed. I hope that you continue to do your work like this in the future also
red rock entertainment reviews(non-registered)
This is my first visit to your web journal! We are a group of volunteers and new activities in the same specialty. Website gave us helpful data to work.
daycare photography in Sydney.(non-registered)
I have read all the comments and suggestions posted by the visitors for this article are very fine,We will wait for your next article so only.Thanks!
mike thomson(non-registered)
When you use a genuine service, you will be able to provide instructions, share materials and choose the formatting style. <a href="https://cozzihometours.com/">real estate photography</a>
No comments posted.
Loading...
Subscribe
RSS
Recent Posts
Alicia Anderson - Player Spotlight Mattie Apperson - Player Spotlight Flour Power Sadie Shadows KaiKanani Feb 2018 Baby Minis Niagara Butterfly Conservatory Toronto Ripley's Aquarium Michael & Shannon's IKEA Registry Hurricanes Rout the Ice on March 17th
Keywords
lethbridge photographer lethbridge photography lethbridge model Lethbridge Hurricanes Lethbridge Wedding Lethbridge Wedding Photographer Lethbridge Wedding Photography ashleigh riemann flour photography sadie fuentes
Archive
January February March April May June July August September October November December
© Lethbridge Sports
Powered by ZENFOLIO User Agreement
Cancel
Continue